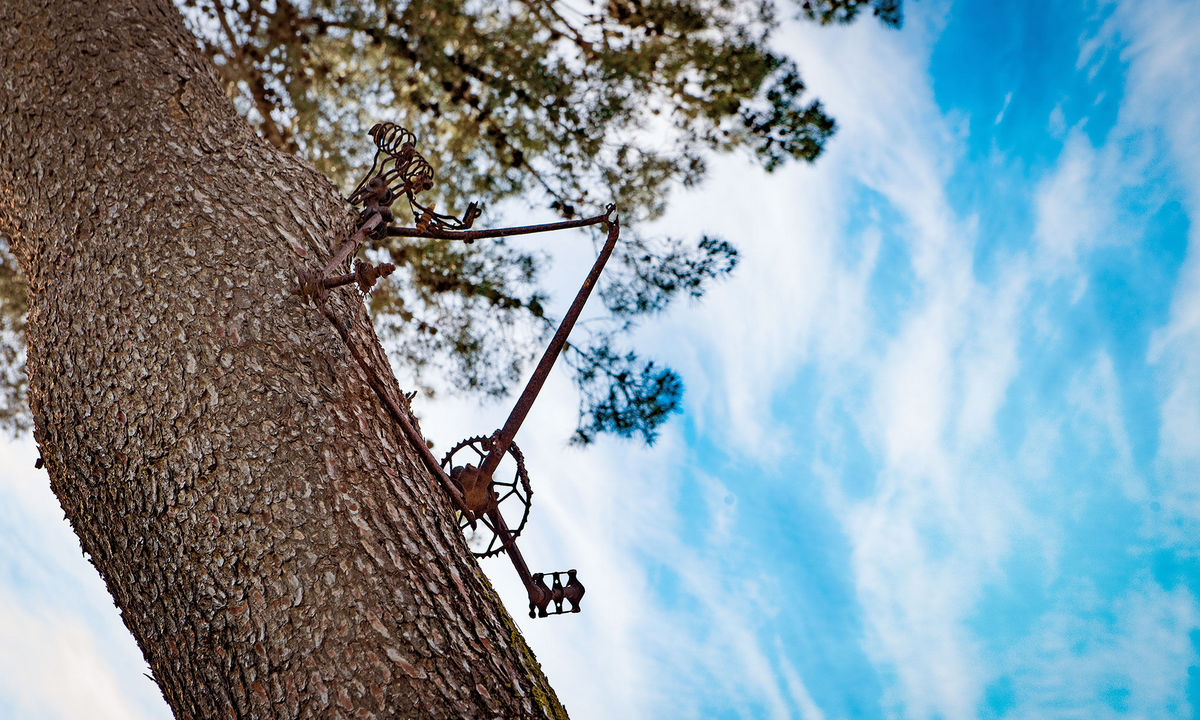 The Boy, the Girl and the Bike

The Boy, the Girl and the Bike

Stand on the sixth tee and look up. Something catches your eye high up in one of the trees. Hanging from the trunk like a medal on a soldier’s uniform is the rusted frame of an ancient bicycle. It’s not a common sight, but the story of how it came to be there is not common either.

Legend has it that many years ago, during the Spanish Civil War, a young man migrant farm hand was working the fields. Like so many people in his situation he was poor. The bicycle was his only means of transportation. He rode in early morning, worked from sun up to sun down and road home again. There were mouths to help feed at home and many days the boy would be the first to arrive and the last to leave.
One morning, like every other morning, he was leaving his bike in the shade and about to head into the field, when he spotted a young woman leaning against an old pine, reading a book. He had seen her before, riding a beautiful chestnut mare along the dirt road that ran between the fields and up to the finca.
This morning, he tipped his hat as he walked by and she said Buenos Dias. That was how it began. He would see her every morning sitting in the same place.
Little by little he got up the courage to speak. Each morning he came a little earlier to give them more time together. Soon that first tip of a hat grew into love. Some mornings she would meet him on the road, hop on the handle bars and the two would spend a few precious moments together riding the twisting country roads.
She loved the speed and he loved watching her hair blow in the wind and the smell of her perfume. Together on that bike they felt free. When his mother found out begged him to forget the girl, his fellow workers warned about the dangers, but the boy was young, in love and unafraid. Soon two things would happen that would change their lives forever.
The harvest came to an end and war broke out across the country.

It was a good year for the farmers in the area, the harvest had come early and was bountiful. But it was a very bad year for democracy in Spain. On July 17th the Civil War began and it had also come to Mallorca. General Franco and his troops spread like a huge kraken over the whole country and they destroyed everything that stood in their way with cruelty.
The young man, whose name was Joaquim, was an anti-Fascist and like many others he took up arms against the right-wing military. Soon however, the fascists took power and so he and the girl, Gabriela, were not able to meet very often. It simply was too dangerous, the war zone was just too close.
One day Gabriela arrived at their meeting point, but Joaquim was not there. But his bicycle was there, leaning on young tree. She waited for hours but he showed up. Finally, as night began to fall, she sadly made her way home, scared for his life. Every day she returned hoping to find him or at least some sign from the love of her life. That would never happen, Joaquim was just one of the many young men who disappeared in the Civil War. At war’s end there were hundreds of thousands whose fate is also unknown.

Joaquim was never heard of again and his body was never found. His bike was soon forgotten in the forest. Rust set in and the wheels fell off. The young tree began to grow over the front fork and wheel and it became one with the tree. Today more than eighty years later the tree continues to grow and raises the bike toward the heavens in a memorial to Joachim and Gabriela and to young lovers everywhere. Next time you are at tee box of hole number 6, you can see it just off to the right, nearly eight meters in the air. You really have to look up to see it. At T-Golf we plan on honoring this historic bicycle in a very special way. To find out what we have planned, stay tuned for Chapter 3.